A few miles east of Shawnee lies the ghost town of Earlsboro. Actually the town still exists today with a few small businesses – namely a tag agency and a restaurant, along with several homes. It offers quite a history, having been through two boom and bust cycles before 1940.

Earlsboro is worth the visit to stop and grab a fried pie or hamburger at David’s Cafe. A transplant from California, David moved to Oklahoma to be closer to his grandkids. He serves up the small town staple of hamburgers, daily specials, and fried pies. Many days you will find locals at the back table. Be sure and give them a shout and learn a bit of history about the area. David has a lot of old pictures from Earlsboro’s boom days on the walls.

Although not exactly a ghost town, Earlsboro is listed as such in John W. Morris’ book “Ghost Towns of Oklahoma“.

Earlsboro has twice been a boom town of considerable importance and twice a decaying, disintegrating, and dilapidated village. It was formed in 1891 a few days after the Choctaw Coal and Railroad Company extended its tracks westward from the Seminole Nation. The town was platted under the name of Boom-De-Ay. A post office by the name of Tum was moved to the new site, and the name was changed to Earlsboro.

The fact that Earlsboro was situated near the Indian Territory boundary aided its early growth. Liquor was prohibited in Indian Territory, but saloons in Oklahoma Territory were legal. Because of the demand of the people living in Indian Territory for liquor, Earlsboro became known as a “whiskey town.” Three of the first four businesses established were saloons; the other was a grocery store. The number of saloons and stores handling liquor continued to increase and to dominate the business activities of the village until 1905. During that year it was estimated that 90 percent of the merchants were dealing profitably in liquor. With approaching statehood, however, many liquor dealers started moving their activities to other states, and the first boom period ended.

Along with the whiskey trade, Earlsboro developed as a small commercial center serving nearby farmers. A blacksmith shop, gristmill, and cotton gin were built. Churches were started and a school district organized. Some streets were graded, and homes were constructed. The railroad located a boxcar next to the track to serve as a depot, and the village became a regular stop for passenger service.

During its first year of existence Earlsboro had a population of about 100 persons. By 1900 the population had increased to 400, and it continued to increase until 1905, when it reached an estimated 500 persons. The special census of 1907 recorded only 387 persons, the decrease being accounted for by the moving of liquor dealers. Population continued to decrease gradually, the 1920 census showing a total of 317 persons.

During the early 1920s the commercial activi- ties of Earlsboro were like those of many other small, farm-centered communities. Poor roads and slow transportation caused farmers in the vicinity to trade in Earlsboro. Subsistence stores supplying the most essential needs dominated the business area. A bank and a newspaper also aided in making it an active rural center.

The situation was completely and abruptly changed on March 1, 1926. On that day the first oil well to be a commercial producer in the
Earlsboro Sand, the well that caused the active development of the Earlsboro Field, “blew in.” The Earlsboro Sand was penetrated at a depth of 3,557 feet, and oil started flowing at a rate of two hundred barrels per day. Although this well was minor compared to some drilled shortly thereafter, the discovery started a violent oil boom; speculation in royalty rights and leases mounted rapidly, and drilling became frenzied.

Once begun, Earlsboro grew rapidly, so rapidly that in two or three months the town had a population variously estimated at from five thousand to ten thousand people. Main Street was lengthened from one to five blocks, with numerous side and parallel streets added to the business section. The streets were lined with stores of all types in addition to pool halls, picture shows, beauty shops, lumberyards, and cafes. A large four-story brick hotel was soon under construction. Doctors, lawyers, engineers, and geologists sought office space in any type of building. The residential area expanded as rapidly as the business section. Shotgun houses of all varieties were built on land once used for gardens or lawns. Tents frequently occupied unused spaces, and often tent space in a back yard rented for as much as twenty-five dollars per month. No streets in the residential area were paved or graveled. Public utilities were almost unknown to Earlsboro when the boom started. There was no sewage disposal, the water supply was furnished by individual wells, and most of the homes used kerosene lamps for light. The post office was entirely inadequate to handle the increase in mail. Earlsboro was too small to have delivery service, so everybody received his mail at the general delivery window or from a box in the post office. Two general delivery windows were soon opened, but this procedure only slightly relieved the situation. The people waiting to receive their mail often formed lines over a block in length.

One of the biggest problems that faced Earlsboro during the boom period was transportation. There were no paved roads in the community or town. Because of the heavy traffic, every road leading to Earlsboro was either a cloud of dust or a sea of mud. Automobiles, teamsters, and trucks all moved at a snail’s pace. Rainfall was exceptionally heavy during the fall of 1926, greatly exceeding the normal. Roads and fields were so boggy that it seemed drilling would have to be temporarily discontinued. Trucks were practically abandoned in favor of horses. Rail transportation was even more inadequate than the roads. Trackage and storage space were missing.

By 1928 the boom was beginning to settle as the limits of the producing fields were determined. New oil developments in nearby fields resulted in many of the single workers seeking steadier employment elsewhere. New city leaders, working with the older ones, began to bring order out of chaos and to improve the facilities of the community. Main Street was paved, a city water system was developed, and electricity was brought to the town.

In 1928 the population within the incorporated limits of the community was estimated at 4,000, but by 1930 it had decreased to 1,950. Also in 1928 the number of business establishments, as listed in the Earlsboro Journal, totaled 286. The 1940 population census (486) and a count of business establishments in the same year (19) showed that the second boom period had definitely ended and that the second stage of decay was well advanced.

Present-day Earlsboro is but a broken hull of the twice-booming community. About forty homes, many unpainted since the 1930s, remain scattered about the incorporated limits. Several residential streets have been closed and a few plowed and planted. Only uncared-for trees and broken foundations occupy previously densely populated blocks. The business area definitely shows that the boom is over and that the town is dying. Once busy streets are now’ almost unused. One block of brick buildings remains, and only three of them are in use. Grass and weeds grow in cracks along the sidewalks and in places once occupied by buildings. The depot built to replace the first boxcar has long since been removed, and trains no longer stop.

The 1970 census recorded only 248 persons. The population continues to decrease. How long will Earlsboro continue? As one of the
oldest residents stated recently, “We can always hope for another boom.”

Cloud Chief – Oklahoma Ghost Town Cruising down Oklahoma State Highway 152 in western Oklahoma on my BMW enduro bike, a dot popped up on…

As you travel along the Oklahoma Adventure Trail in northern Oklahoma, be sure and take a one mile detour north to visit the United Methodist…

Pleasant Valley is an old Oklahoma ghost town located between Stillwater and Guthrie, just south of the Cimarron River along a dirt road. It once… 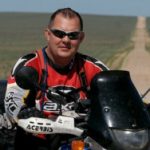